What is Fencing?
Fencing was one of the original nine sports in the inaugural modern Olympic Games played in Athens, Greece in 1896. It is one of only four sports that have been featured at every single Olympic competitions since 1896. 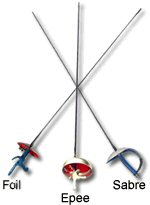 There are three weapons in fencing: epee, foil and saber

The sport of fencing incorporates agility, strength, coordination, balance, and timing. In fencing, physical ability is just as important as having a strong mental edge. The competitors of a fencing match wear protective gear including a jacket, glove, and head gear. The sport of fencing features three different levels, which are categorized by the type of weapon used in each level. The weapons used include the epee, foil, and the saber.

In epee, points are scored with the tip of the blade; the entire body becomes the target, including the mask.

In foil fencing, touches are scored with the tip of the blade. The target is the torso. Fencers wear a metallic vest, or lame, to register touches electronically. Beginners learn the foil method first because it is the most technical form of fencing to execute and requires the most legwork. The foil method also incorporates all the basic elements of fencing.

In saber fencing, points can be scored with the tup or the sides of the blade and the target is the bend of the hips to the top of the head. This is by far the most physical of the types of fencing.

While only about one pound and 35 inches long, a foil is not an easy weapon to wield. Because of this, beginnersare usually taught how to control their body before learning to control the sword.

Fencing is a very aerobically challenging sport, featuring lunge after lunge. The fencing area itself covers a 6×40 inch surface, which traces back to the days when competitors scratched lines in the dirt to contain the playing surface. Back then, competition was about heroically confronting an opponent in a confined space, turning your body away was considered cowardly.

In order to condition one’s body, initial fencing training consists of grueling conditioning exercises, ike squatting and lunging. After initial conditioning, a competitor must learn when to attack, parry, and repost. Only one of the competitors can attack and score, while the other must block the attack or parry. This competitor can also launch a counter-attack, or repost. In order to learn how to block an attack, competitors are often taught by standing against a wall while the attacker stands only a few feet away. This way students learn who has the right of way and can practice offensive and defensive techniques.

All attacks and counter-attacks are launched from the standard fencing position. In order to get into position, a competitor stands sideways with their lead foot facing the opponent and the side foot facing straight out, with their knees bent, in lunging position. The foil should be held in the hand of choice either up over the head or in a 90 degree angle for balance.

A modern day lure of fencing seems to be the desire of major universities in this country to boast world class fencing teams, making scholarships available in abundance to young and determined fencing enthusiasts. Fencing professionals continue to stress that just about anyone can learn fencing, due to its mental and physical components. If one lacks what it takes physically, the mind can make up for it and vice versa.