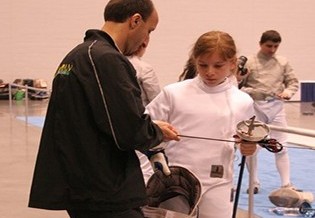 Welcome Home is a Stone Oak area magazine in San Antonio and featured an article on Olympian’s recent efforts in the NAC in Virginia Beach. The article features Robin, Farrah, Evan, Olica and McKenna, including a photo of Coach Velizar and McKenna. If you have a copy of the magazine, please contact the Olympian office.

Results are posted on AskFred.net. Congratulations to all of our competitors from this weekend’s event:

Olympian is sending twelve fencers to the mega epee camp in Houston, TX at Alliance Fencing Club, led by Andrey Geva. More than eighty fencers are attending this key prenational camp from all over the United States. If you are interested in attending this key developmental camp and the great opportunity to fence excellent competitors nationwide, contact our office for details on attending. Coach Velizar will also be coaching at the camp along with Andrey and other great world class talents.

Join Us for the 2012 Olympian Pre-National Epee Cup

Join Olympian Fencing Club for the 2012 Olympian Pre-National Epee Cup featuring mixed Y10, Y12, Y14 and Senior competition. You do not want to miss this Pre-Nationals event which will feature 2012 London Olympians Kelley and Courtney Hurley in the senior division, as well as former Olympian Velizar Iliev. There are already 3A’s, 2B’s, 1C and 1D registered for the senior division and 2B’s  and 1D registered for Y14 competition.

Register online at AskFred or put it on your ...

Olympian welcomes Coach Viktor Svatenko who has joined us this week, now in his seventh year as fencing coach at Penn State, brings a distinguished background in fencing and modern pentathlon to Olympian.

During his tenure as fencing coach with the USOC, his athletes, including Coach Velizar, claimed a silver medal at the Olympics as well as three gold, one silver, and a bronze medal at the World Championships. He also coached athletes to four gold medals at the Pan American ...

Coach Velizar and Coach Viktor were guests at the international fencing center groundbreaking ceremony today at St. Anthony Catholic School. Here they are next to UIW president Dr. Louis Agnese.

The sports center is set to be completed by August 2012 with $2 million in funding from the Bexar County Venue Tax ...

Olympian and San Antonio Fencing Center were featured on the segment “Where’s Cleto?” On Monday morning. Here is the video segment:

Olympian to be Featured on KMOL4

Watch for Olympian Fencing Club on Monday May 21st during the 5am newscast. A live feature will be done on the fencing school, highlighting our techniques and many of our fencers. Wake up early or be sure to record it!

Olympian took more than ten competitors to Austin for the Austin Challenge RYC in May 2012. Several brought home medals, including Chris Sahin, who won the gold for Y14 men’s epee.

Olympian Fencing Club will be sending thirteen epee fencers to the USFA event Austin Challenge and Regional Youth Circuit (RYC) tournament at the Austin Sports Center in Cedar Park. This RYC is a three weapon event and is a qualifying path for Y10 and Y12 fencers to fence in the July North American Cup (NAC). Also, those fencers finishing in 1st place in a Y14 event qualify for the Summer Championships in July. USFA or FIE ...